The work, which has always been a kind of research process, an exploration or an investigation, remains concerned with testing the boundaries of convention and tradition within the practice of fine art .

As a long time enthusiast of Eastern philosophy and religions, and a regular practitioner of yoga, I constantly return to a position of ‘less is more’.. The process of a constant search for ‘essence’ and ’emptiness’ has resulted in the practical statements and themes which can be found, for example, in the earlier Square Frame sculptures (Ikon, 2004), the Meshes (Atkins Gallery, 2009) and the Black Paintings (LCBDepot, 2014).

The earlier solo shows, at the LCBDepot in 2009 and the Atkins Building in 2011 entitled ‘Idea as Object,’ were concerned with a predominately conceptual approach in which my ideas were made by specialist fabricators who made the pieces from my drawings, diagrams and models.

More recently the concerns have shifted from the conceptual and cerebral to a more personal ‘hands on’ approach. In these later studio based works I am aware of the importance of letting things happen naturally and allowing the accidental and unforeseen to come into play together with overall concerns about the importance of order and structure. The satisfactory resolution of each piece, I find, is achieved where a balance is arrived at between the two elements the rational and the intuitive. I also find that it often turns out that a piece will evoke a feeling or a mood which is associated with an earlier experience, usually of a particular time or place (hence the titles!). 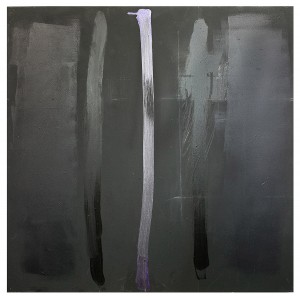 I use photography and drawing to make notes and as a means of developing a visual vocabulary. In this context photographs of various everyday surfaces , often ‘Stressed’ (floors, pavements, walls etc.) act as markers for how the painting surface and technique can be developed.